Yes, we chose Detroit for a little R & R.  Why, you might ask?  Here are a few reasons.

“One of the most beautiful homes on Airbnb. This is a 4 bedroom, 4 bathroom historic home in one of the most beautiful, one of a kind neighborhood of Detroit. Woodbridge is in Midtown, and a mile from most of Detroit’s finest sights, art, and stadiums. My wife and I are in Greece for at least six months helping refugees and your stay is our only revenue keeping us there. Thank you!”

Why think twice?  This is where we stayed.

The gardens out back were very representative of an English garden, overgrown vines as far as the eye could see

whether in nature, or otherwise. 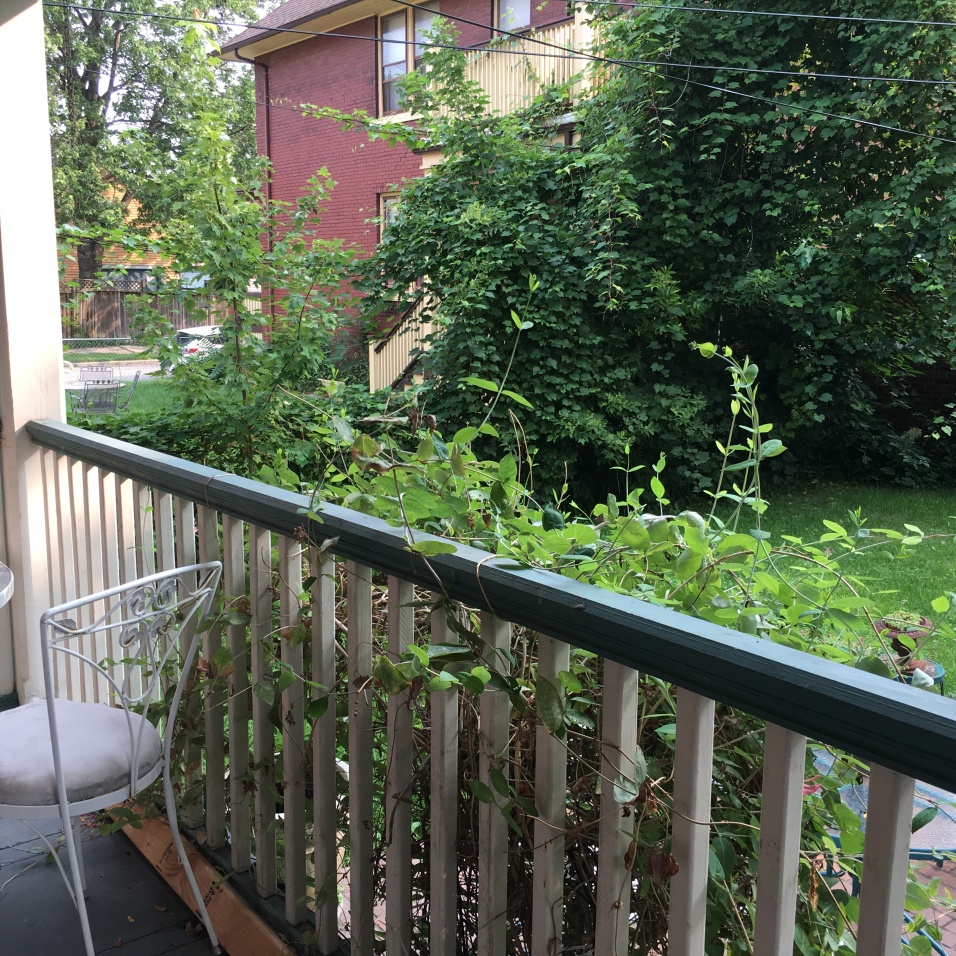 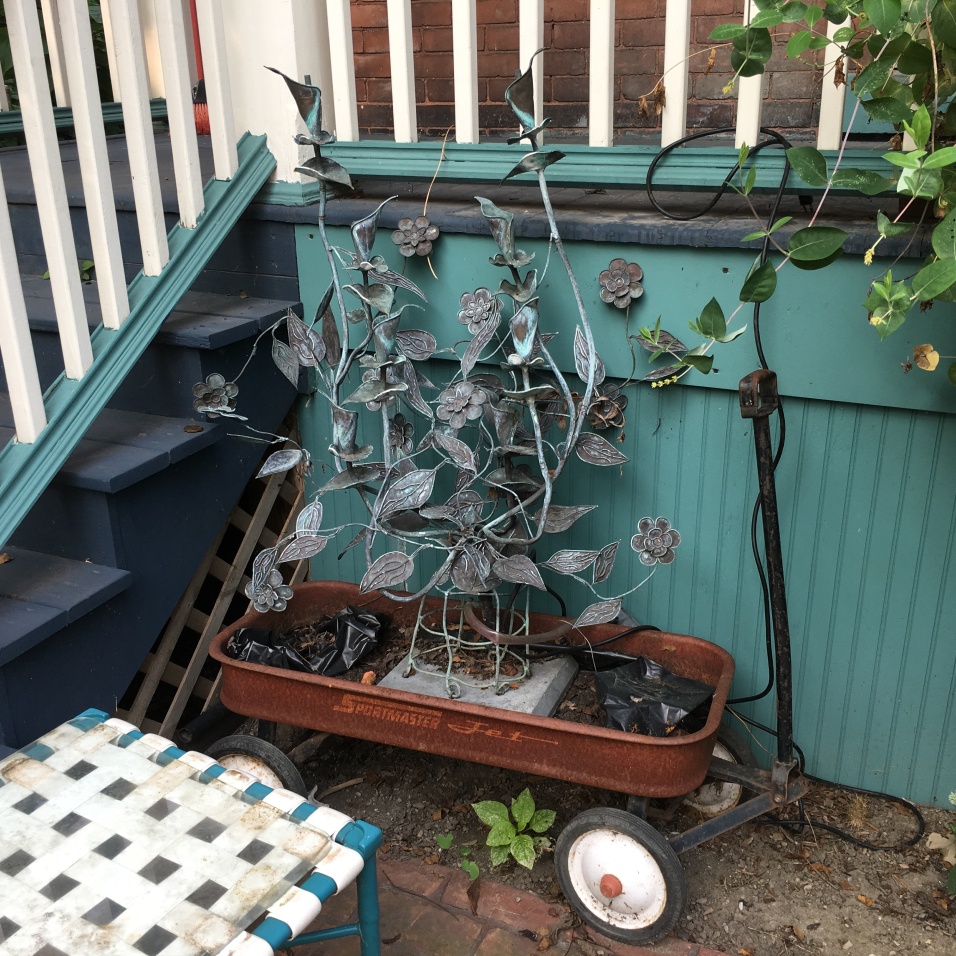 The front porch was lovely for relaxation or as a backdrop for photo taking a couple on the go.

Did you know the Detroit Institute of the Arts is ranked 9th of best museums within the United States?  Very impressive by all of our (critical) standards.

The museum offers a variety of exhibits; this week satisfied the variety of our interests.  (There is some Chewbacca story, here.)

Detroit-ians seem to love their scooters.  They are for rent everywhere.

Patio restaurants dot Detroit. We learned of a few from our Airbnb host.  We chose Cornerstone Barrel House and enjoyed fine dining on a warm summer’s eve with the city looming around us. 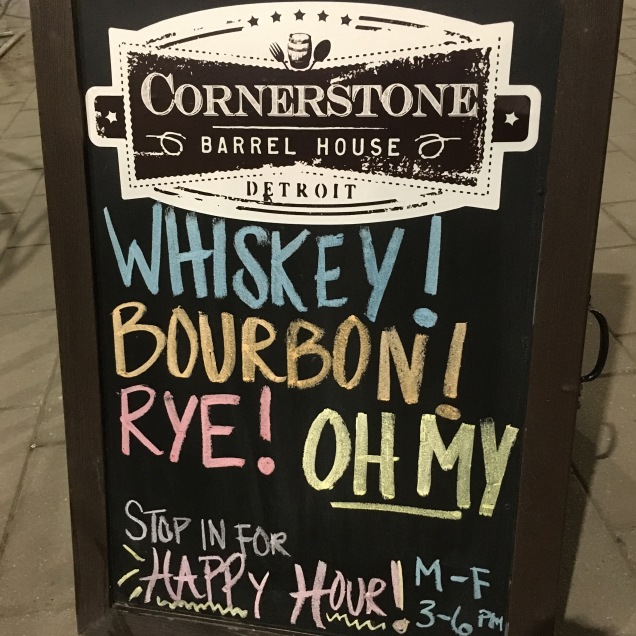 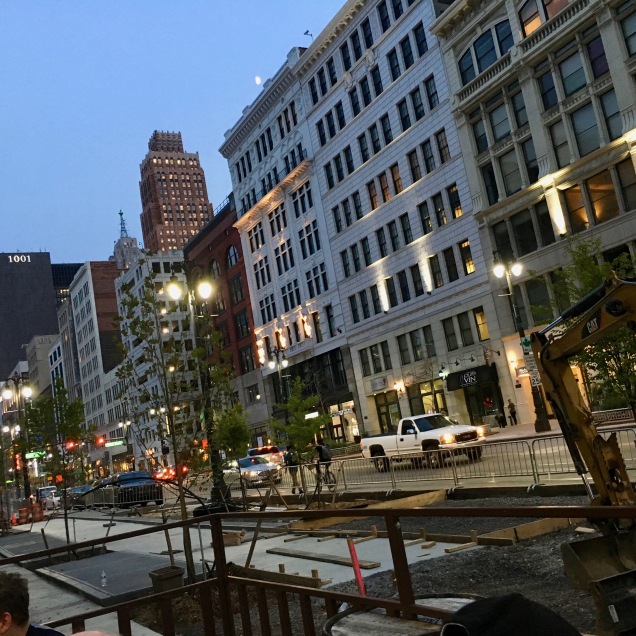 Detroit Museums include an expansive 250 acre tribute to America’s past called The Henry Ford, celebrating America’s culture and innovative people of the times. Greenfield Village, a living museum representing America’s past 300 years and the Henry Ford Museum honoring inventions and people with a can-do spirit are on the property.  There is also a Factory Tour (we did not partake) and Must-See events throughout the year.  All of this can easily be a destination vacation in and of itself.  Here we are deciding where to turn first.

Carriages and Model-T Fords, everywhere you look, are on posters and on the roads.

My personal favorites in the village were the card shop demonstrating preparing raw wool for spinning, Lincoln’s courthouse where he practiced law before his Presidency, Henry Ford’s home, and this original Detroit Millinery, circa 1880.  Fashion always catches my fancy. 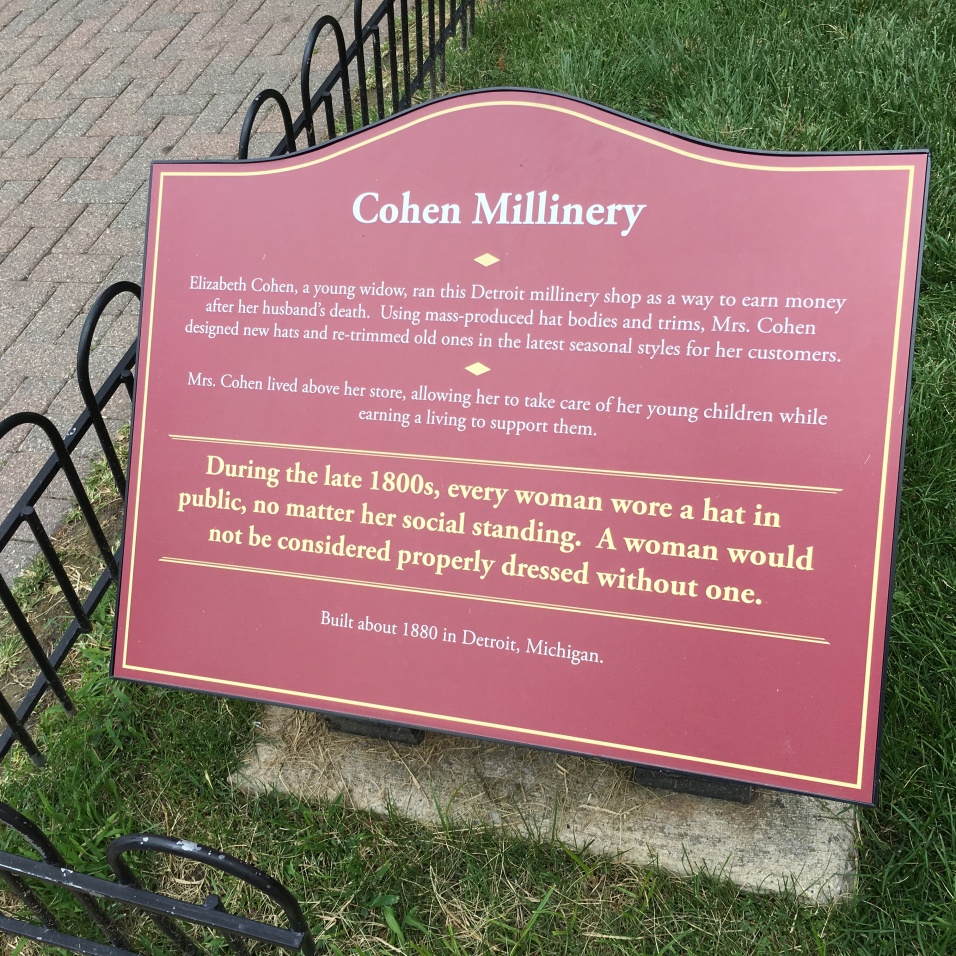 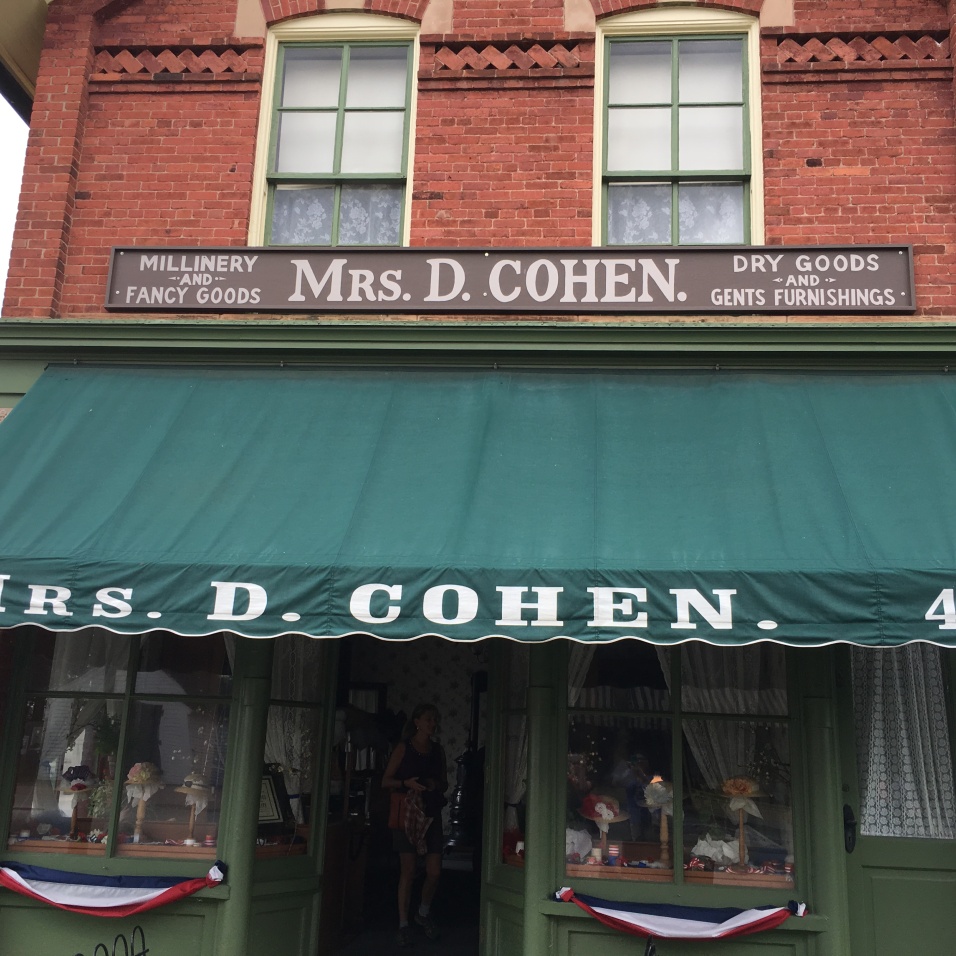 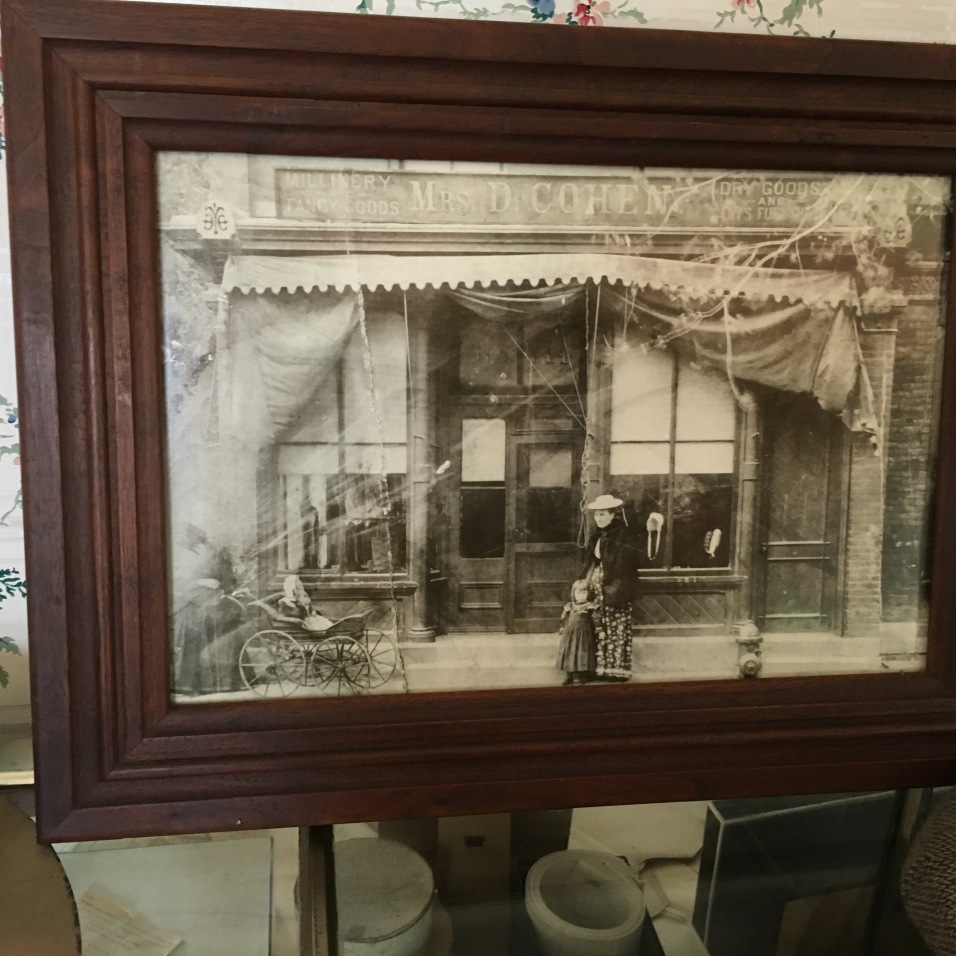 Just look at this antique thread and pin cushion. 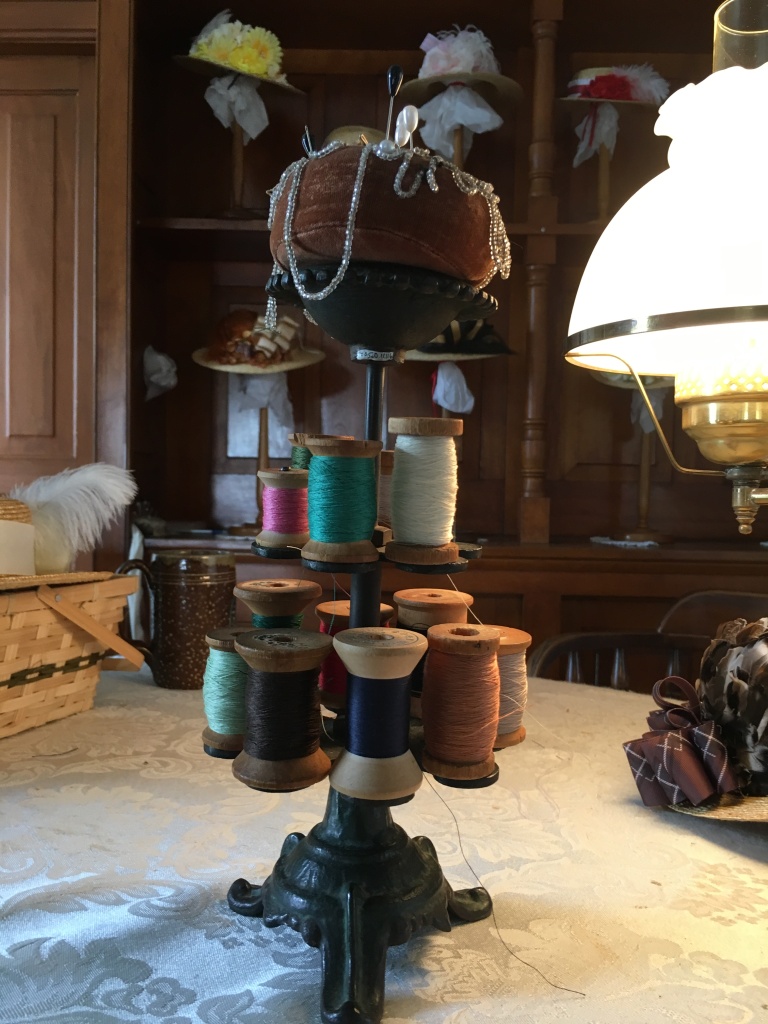 (More than ever I want to knit this Nicky Epstein piece, found in Vogue Knitting, Spring/Summer 1993.)

We rallied our enthusiasm (and energy) to continue onto the Henry Ford Museum. Both on a personal level as well as with nationalistic pride, each of us stopped to reminisce what we saw. Highlights included the McDonald’s sign (I was always impressed as a child the ever continuing count of burgers sold). The Presidential Parade of limousines caused us to linger and recall ‘where we were’ at the moment of President Kennedy’s assassination. We sat in the very bus Rosa Parks made famous with her spirit and determination. The docent’s speech about Rosa was powerful and well delivered.  It was the stand out moment of our day. 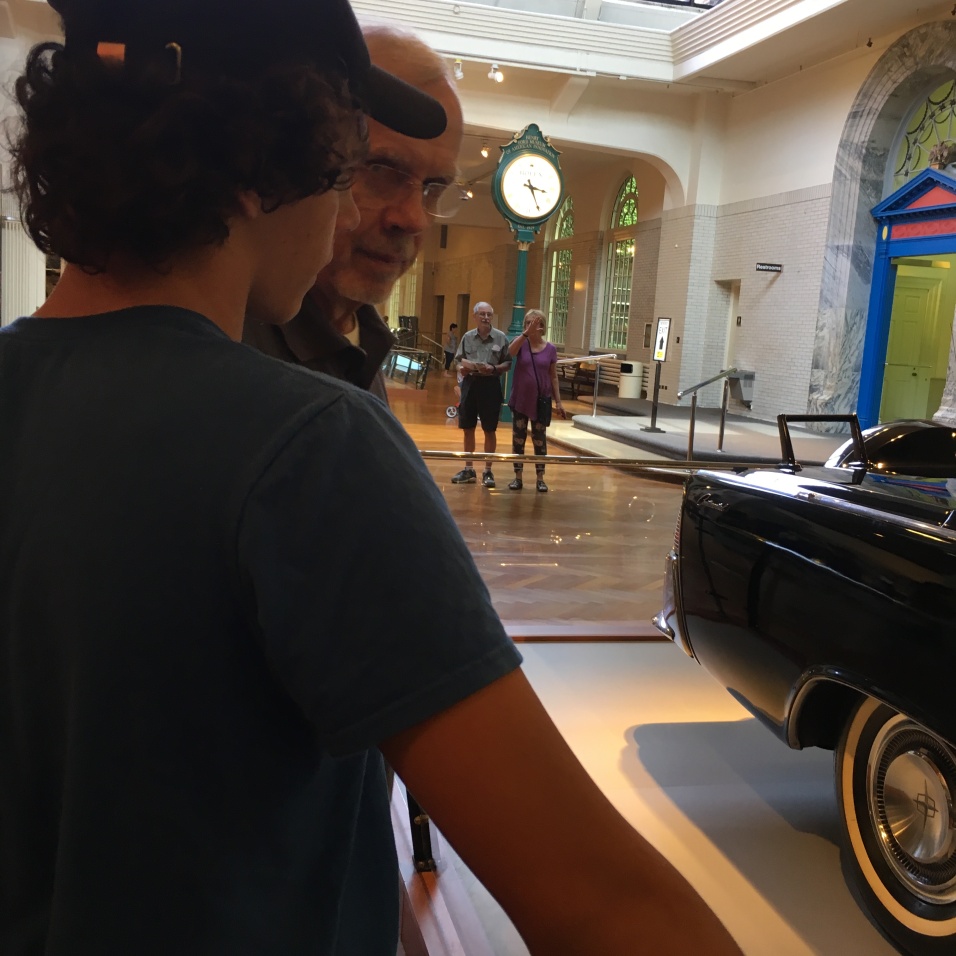 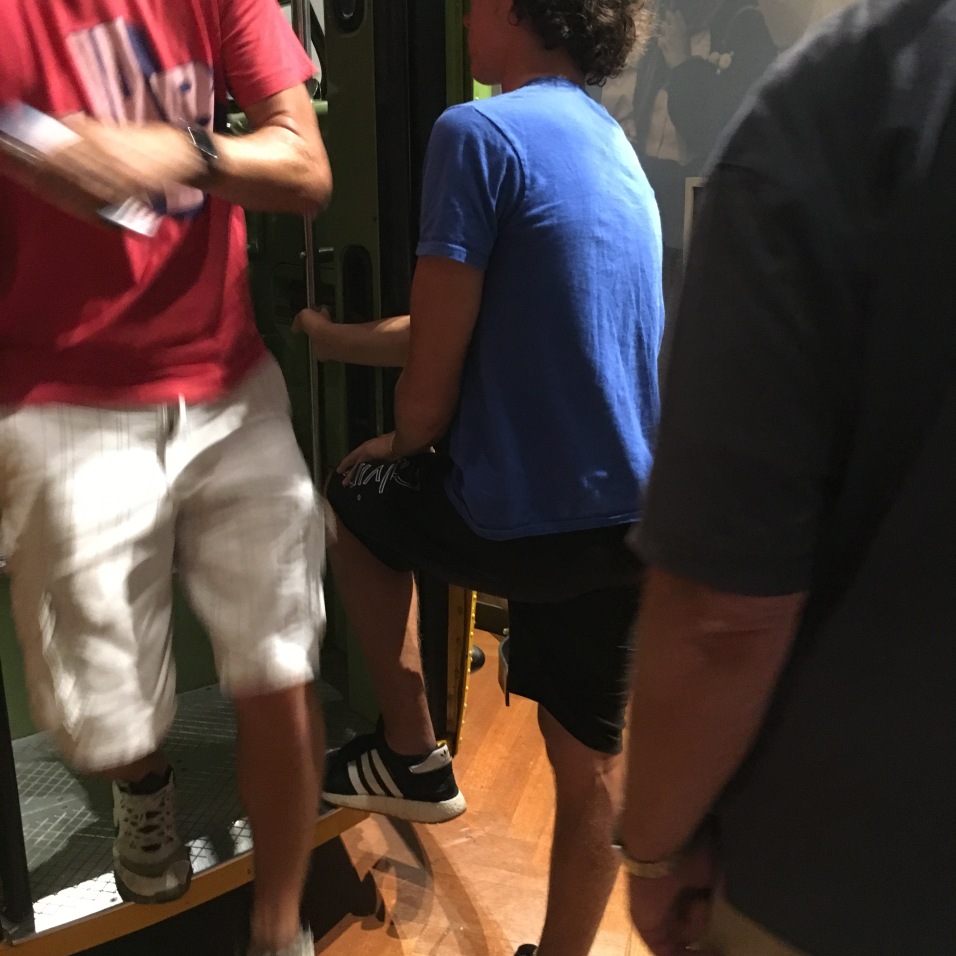 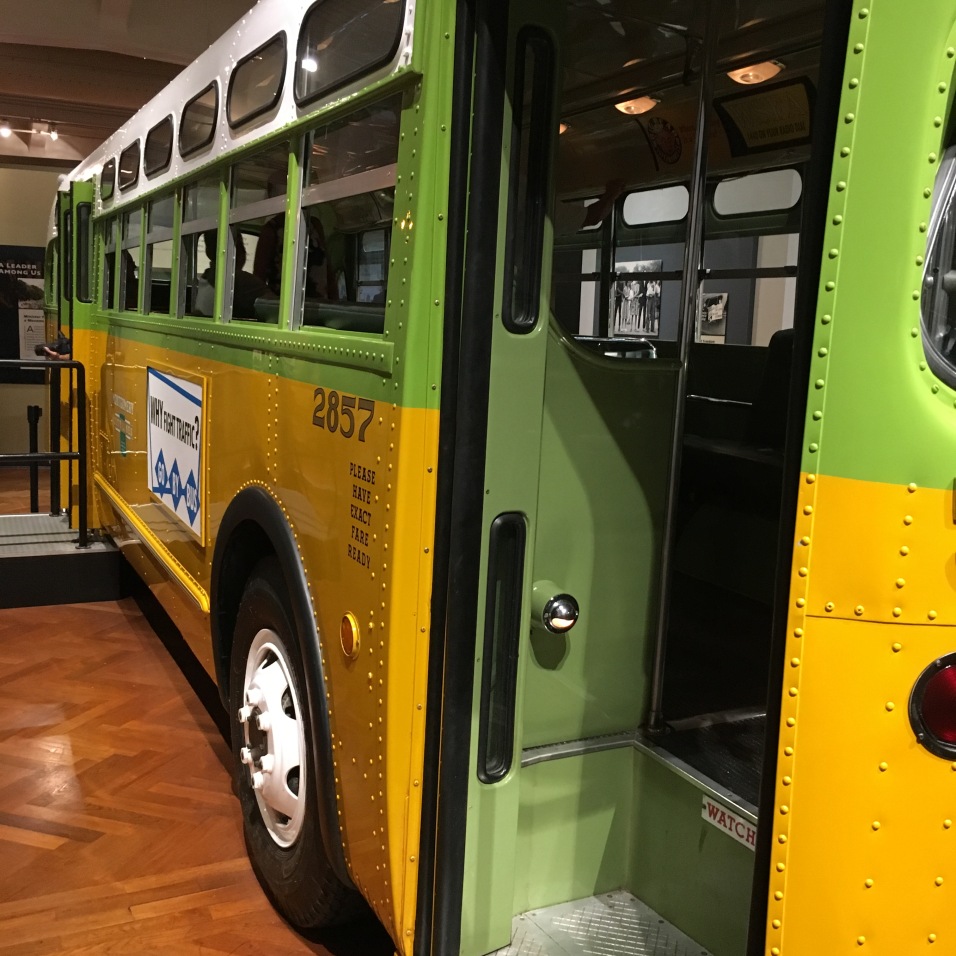 Of course when you travel anywhere, you need to experience a bit of the culture of that place.  Here we are coming out Sweetwater Tavern where we lunched with a local who just happened to have a Buffalo connection.  OK, so he is Owen’s dear friend.  Check out the spelling of Spirits on the awning.  I had Detroit cherry salad to die for (yes, the salad was that good), others had wings which are prepared with a rub as opposed to a sauce. NOTE TO SELF:  I need to learn how to take group selfies as we are missing a key ‘member’ of this group. 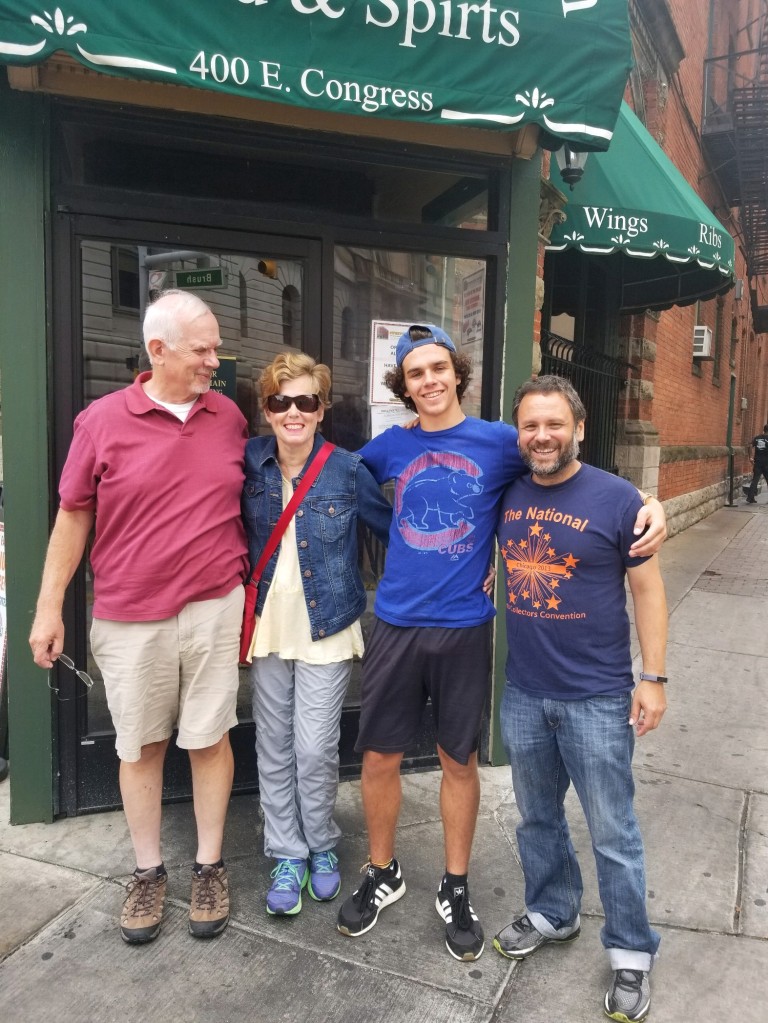 Here are photos of Detroit’s city scape juxtaposed with the Detroit River, the communities’ refurbishing efforts called Detroit Riverwalk,taking a stroll, and catching a picture of the port o entry, a tunnel actually, connecting the US with Canada. 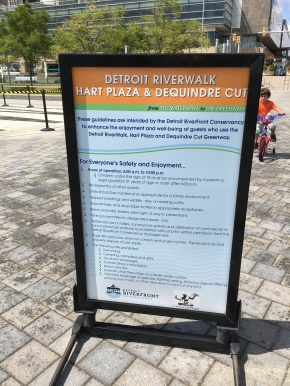 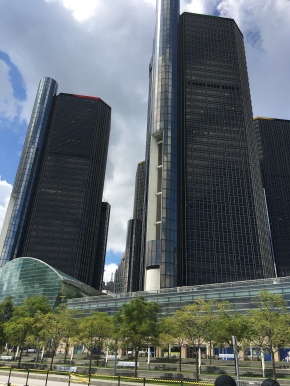 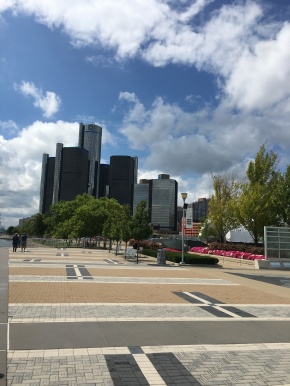 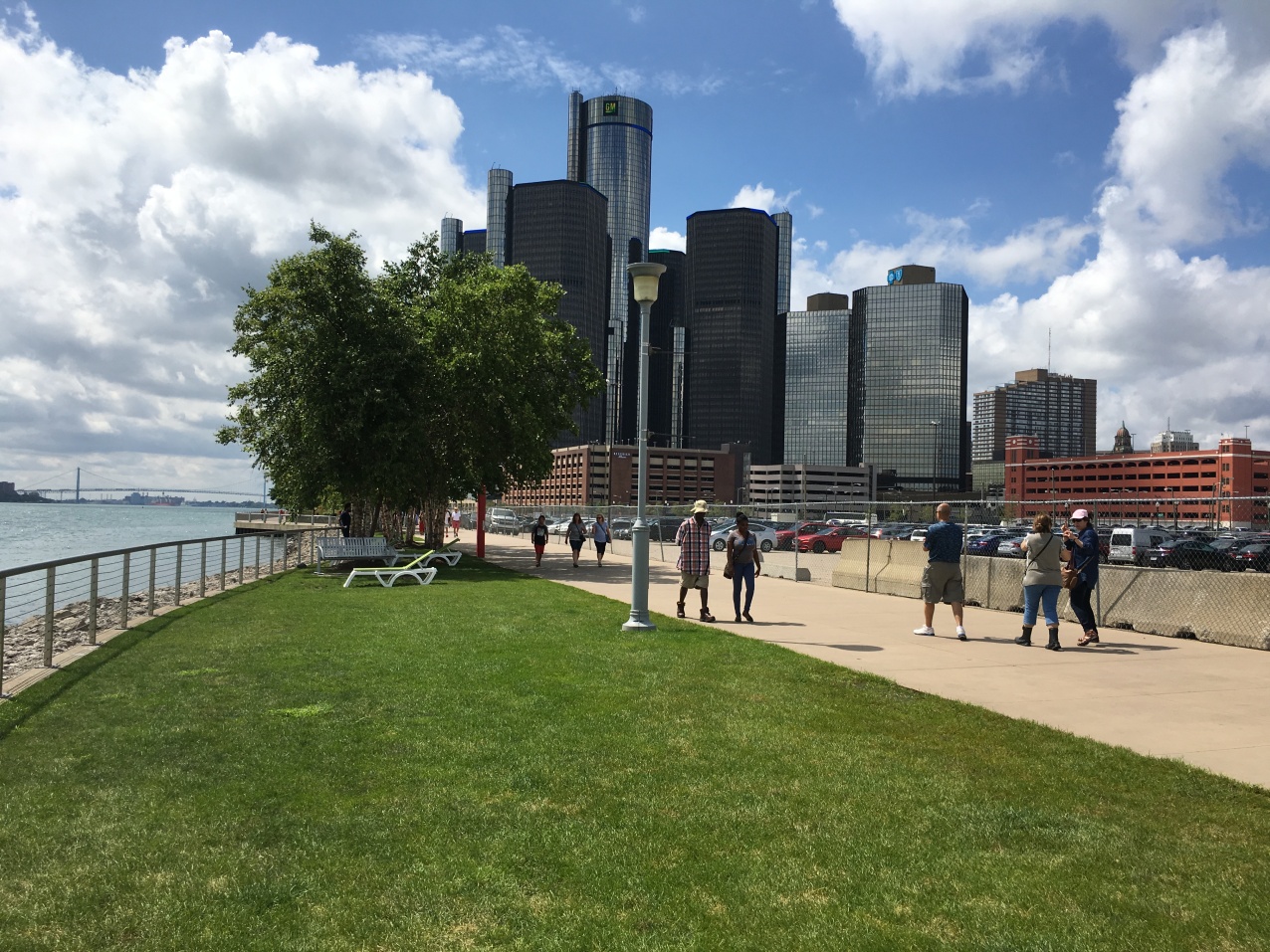 Now, the real reason WE chose to hang in Detroit may have had something to do with this.  You see, I was in the company of some real serious Cubs fans. Having never been to Detroit and knowing the Cubs were playing that week, our vacation destination was decided.  The rainbow was real and cleared the skies beautifully for the game however did not clear the diamond for a win. Tigers 2, Cubs 1. 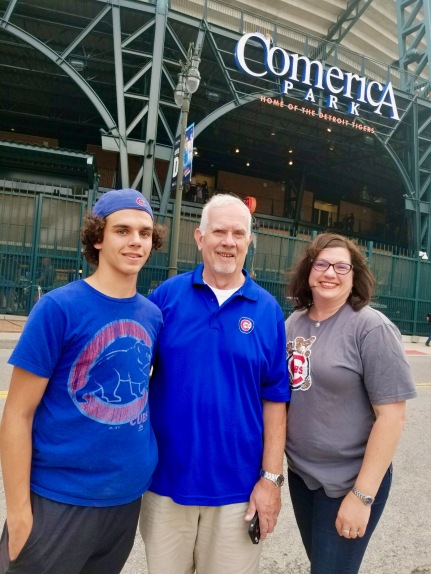 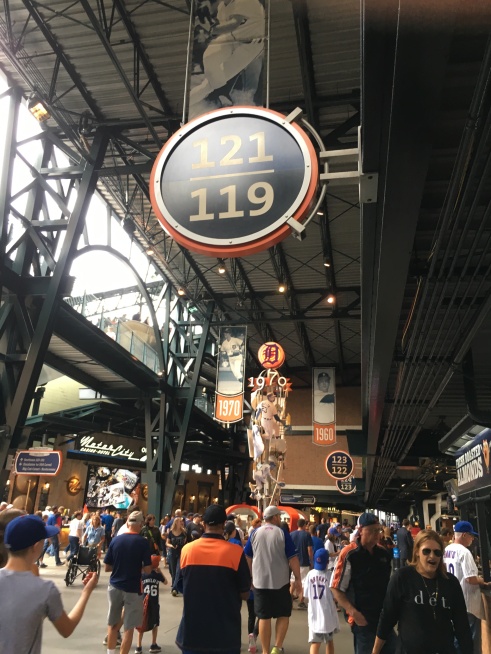 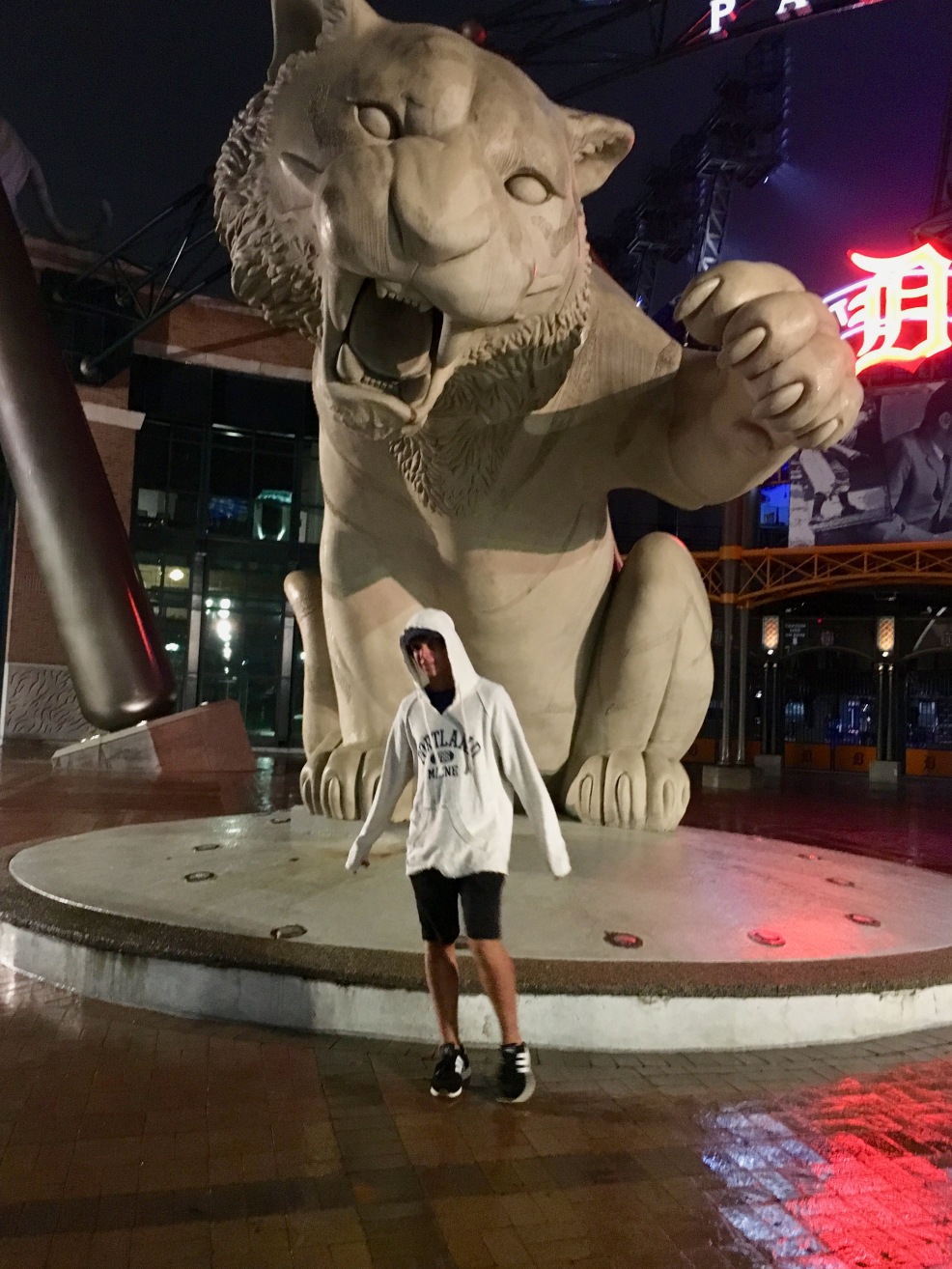 Jazz anyone?  Detroit just may be your city.  (There was a one minute of silence as a tribute for Aretha Franklin at the game.) These last photos is of the jazz club, Cliff Bells. We attempted going each night during our stay. We finally made it in after the game.  We caught the last two pieces of the set just before the gig ended while enjoying cool drinks of the adult kind.  The theater itself is worthy of a walk-in. 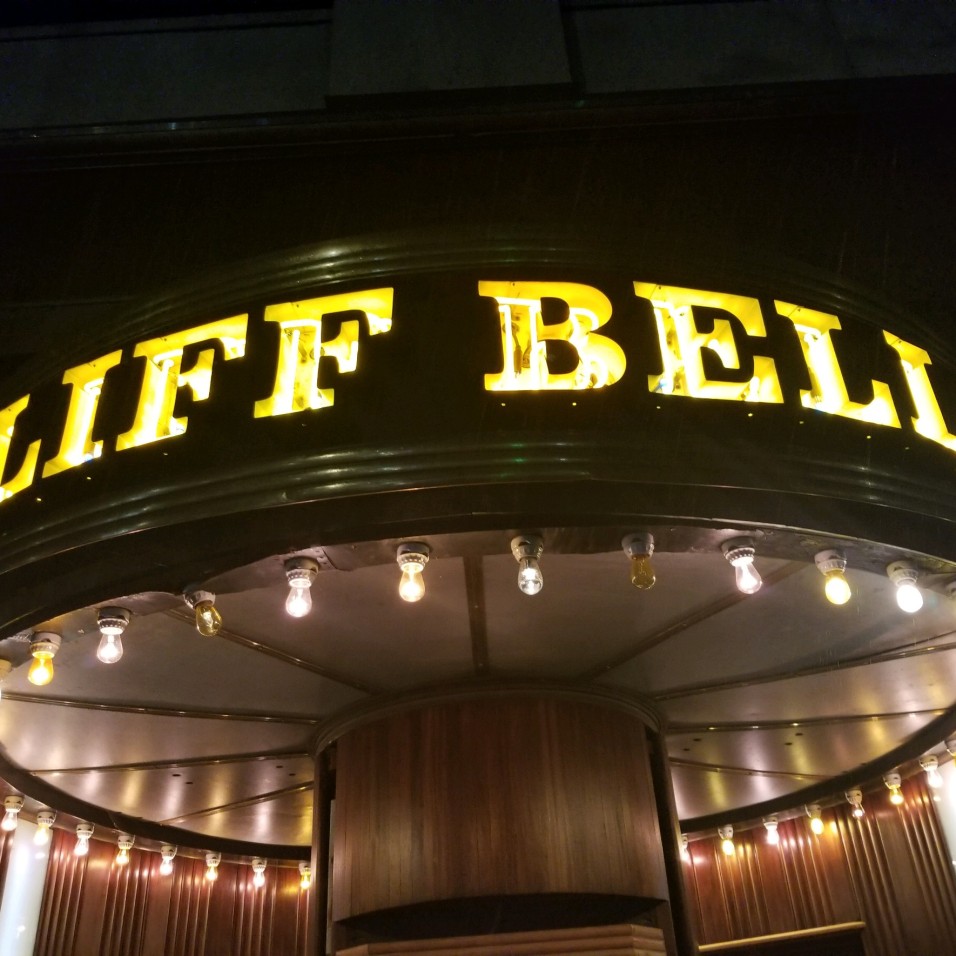 Detroit did not let us down and may this post inspire you to consider this city a worthy destination for your next vacation.

Holly is an avid knitter of fashion, plays with color and design, and enjoys writing.  She especially loves combining the artistry of knitting with photography, getting inspiration from local historical sites as well as from nature’s four-season color and texture.