Sometimes you see a project that you have to have against all reasoning.  I asked myself all kinds of questions to try to talk myself out of making this.  What?  I cannot purchase all the yarn needed for this in the same dye lot?  When?  Combination short sleeves with a high neck collar, what season will I wear this?  How?  Pleats with bulky tapestry-like fabric will work?  The more I asked myself these questions, the more I leaned towards believing in Vladimir Teriokhin’s design as seen in Vogue Knitting Holiday issue 2012 and couldn’t wait to make it for the holidays. 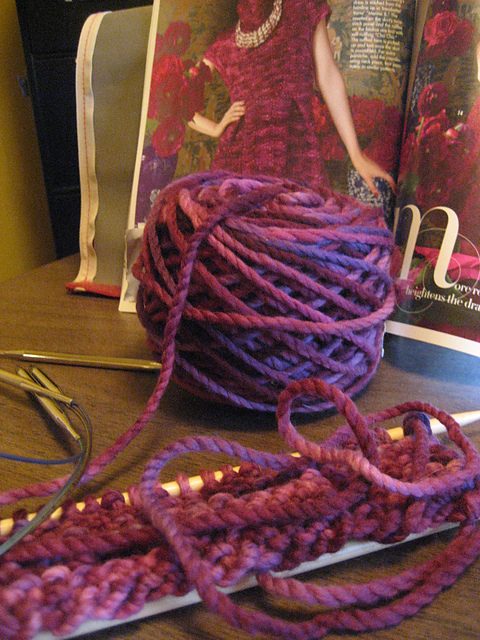 There was no real issue beginning this project except to organize the yarn, Koigu Wool Designs Bulky according to the different dye lots (this hand dyed yarn only came in bags of ten with the same dye lot, or so it was that way at the time of purchase) and I needed more than that for this dress.  So, I purchased half the yarn required in one dye lot, the other half in another dye lot and alternated the skeins of yarn as I knitted. 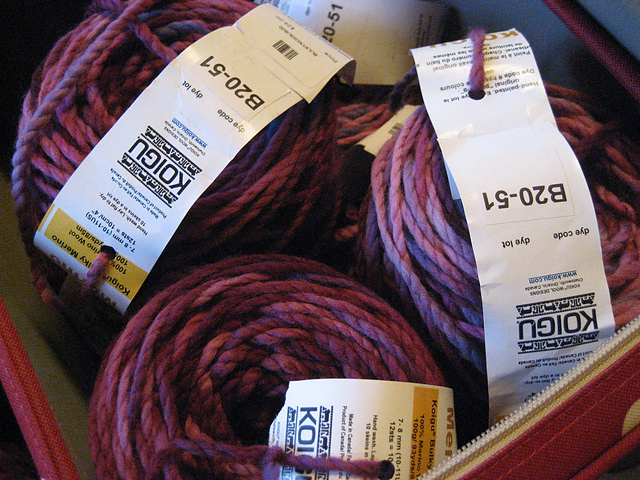 Now, I thought the entire dress was knitted in seed stitch but upon beginning, you see immediately that it is a patterned seed stitch.

And, from the hemline up to the pleats, it is a matter of following that pattern leaving a stitch at each seam in garter stitch for the selvage edge.  (I pretty much always form a selvage edge whether the pattern calls for it or not as it makes sewing [crocheting] the pieces together a snap.)   As I am knitting this dress I am questioning why it was marked as ‘experienced’ skill level.  I mean aside from the amount of fabric and heft of the large needles, this seed stitch pattern was pretty straight forward. 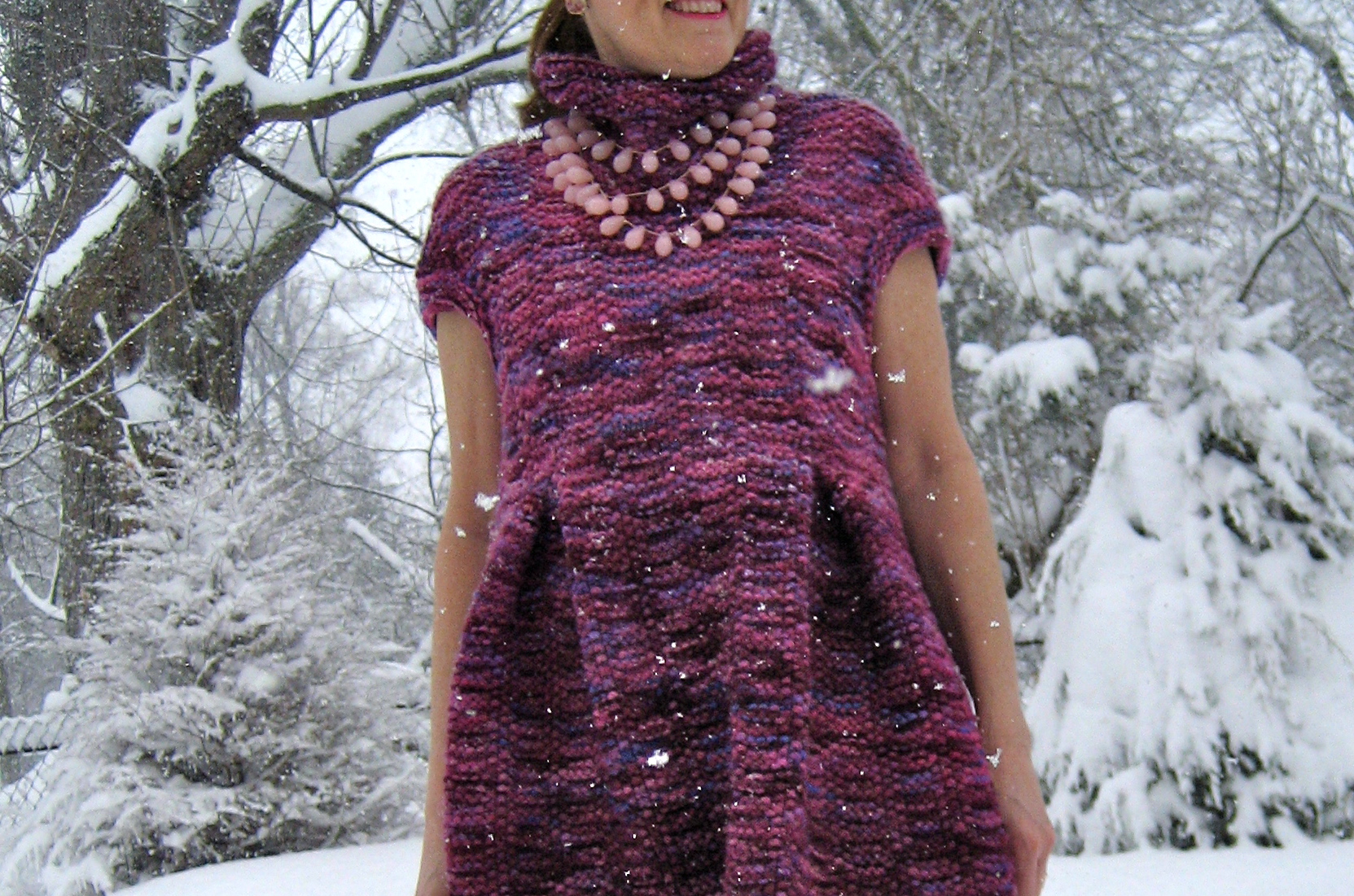 Excited to get to the pleats as they are what makes the dress not to mention I was ready for a break in the action, I followed the directions in the pattern for the pleats.  What are these holes?…. no!  Stitch count… wrong!  Pattern mismatch galore!  Double folded fabric when it should have been triple folded for a box pleat…no!  Many mistakes and then I came realize, the pattern was written wrong.  So, after folding a piece of paper to give me a visual of what the construction of a box pleat looks like, and counting and re-counting the stitches to get the pleats to land at the place they were supposed to, I researched, re-wrote, and offer the directions below:

Practice folding a piece of paper to get a visualization of the box pleat and you will see that to create and secure the folds, you will be knitting from 3 needles at once, 1 stitch (st) from one double pointed needle (dpn), 1 stitch from another dpn, and the 3rd stitch directly from the project needle.

NOTE:  When you fold the fabric of the skirt and continue knitting the bodice, the pattern changes between the row markers due to those folds, but after all the decreases in the bodice are completed, the pattern re-joins perfectly.  This may be the reason why this project was rated as experienced as it took many rip outs and re-dos for me to realize that this would be the case.  Actually, quite clever.

After the pleat row is completed, the rest of the directions are accurate until you get to the cowl.

The other really important part of the pattern, the cowl neckline also has direction issues. Row in question should read:  Decrease round: work in stitch pat as established to 2 sts before next marker, SKP, sl marker, work to next marker, sl marker, k2tog, work to end of rnd.

This did not make the 2014 holidays, however is a lovely addition to my wardrobe and will be a fun piece to pull for future special events. 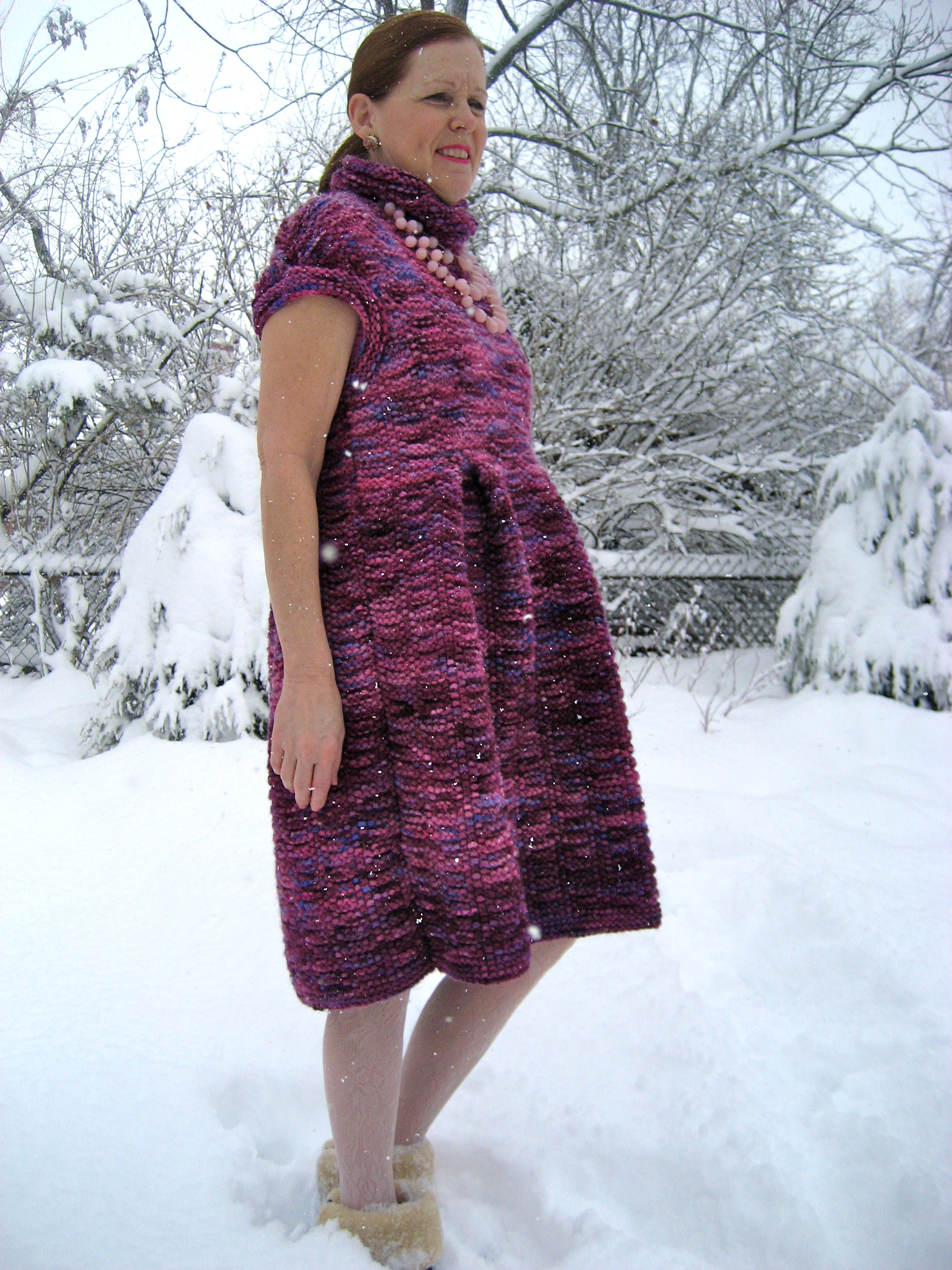 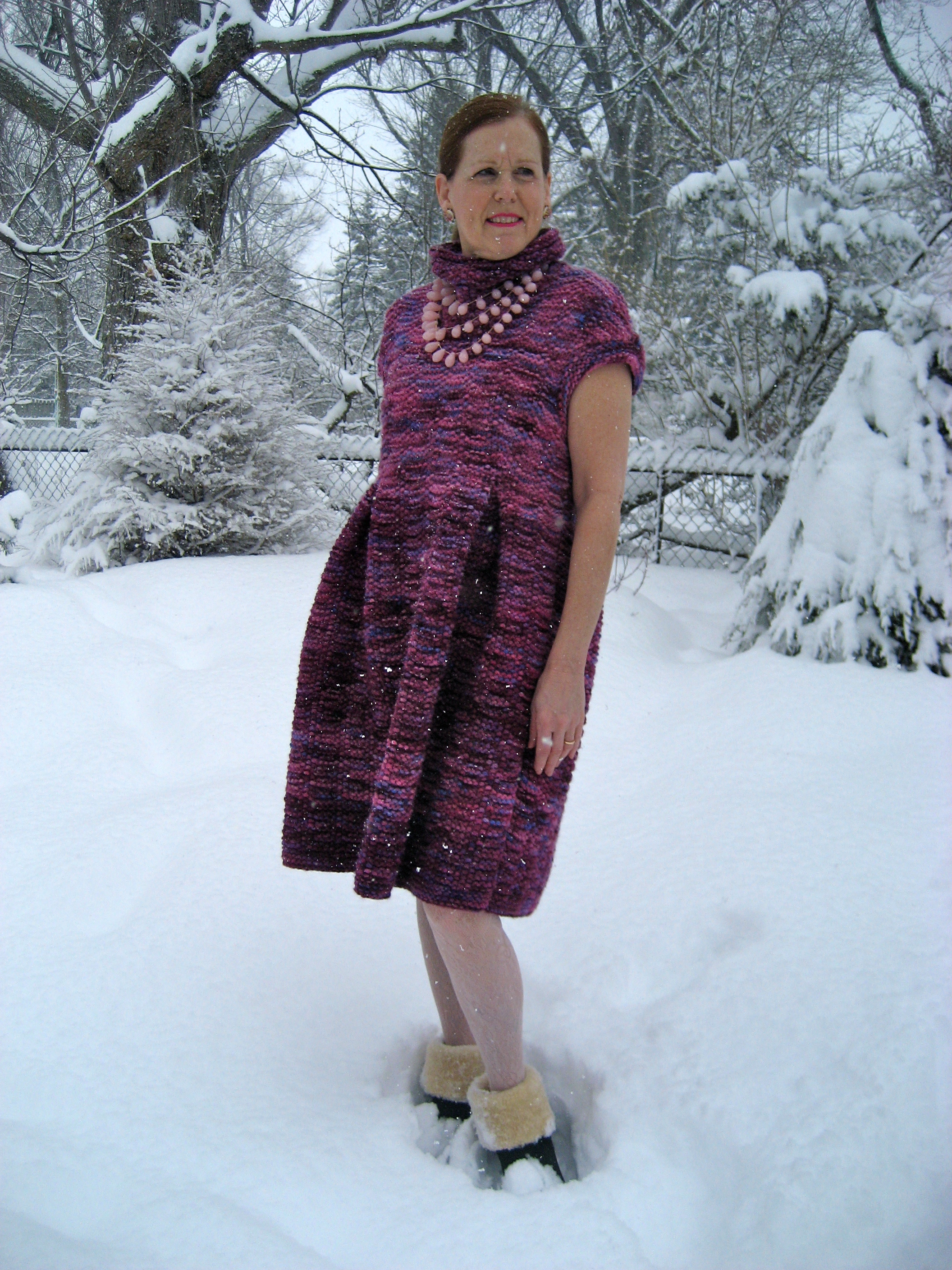 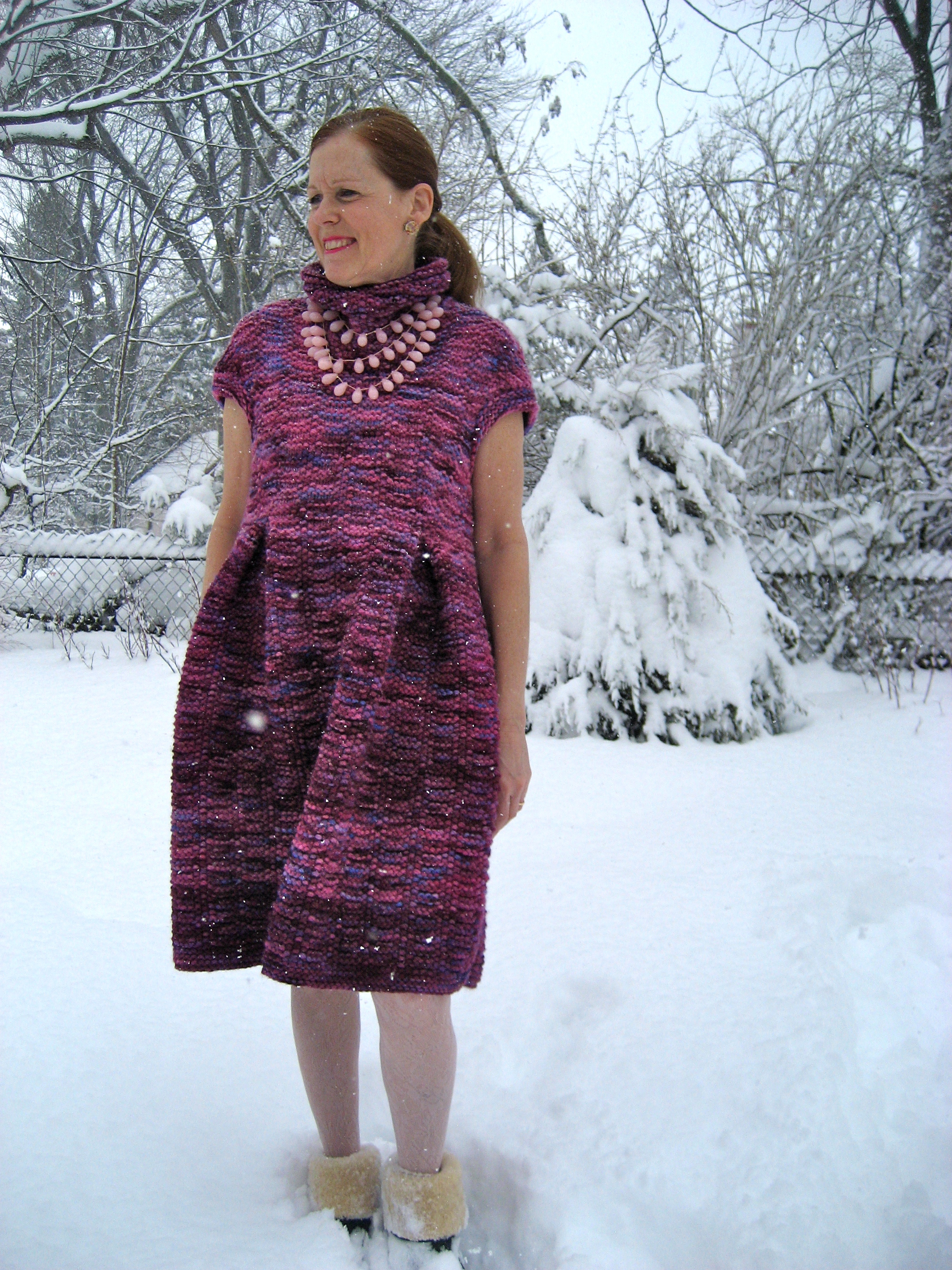 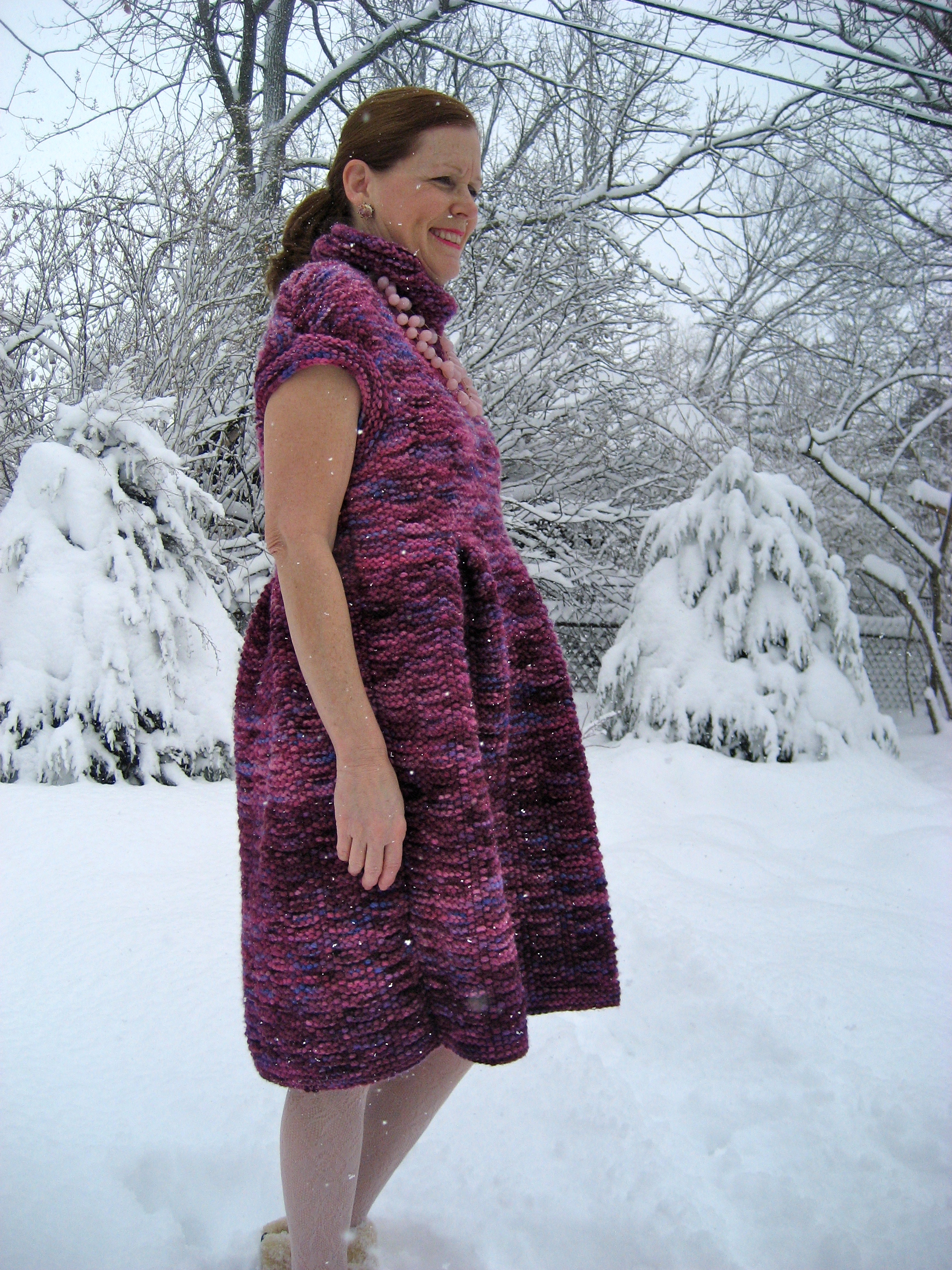 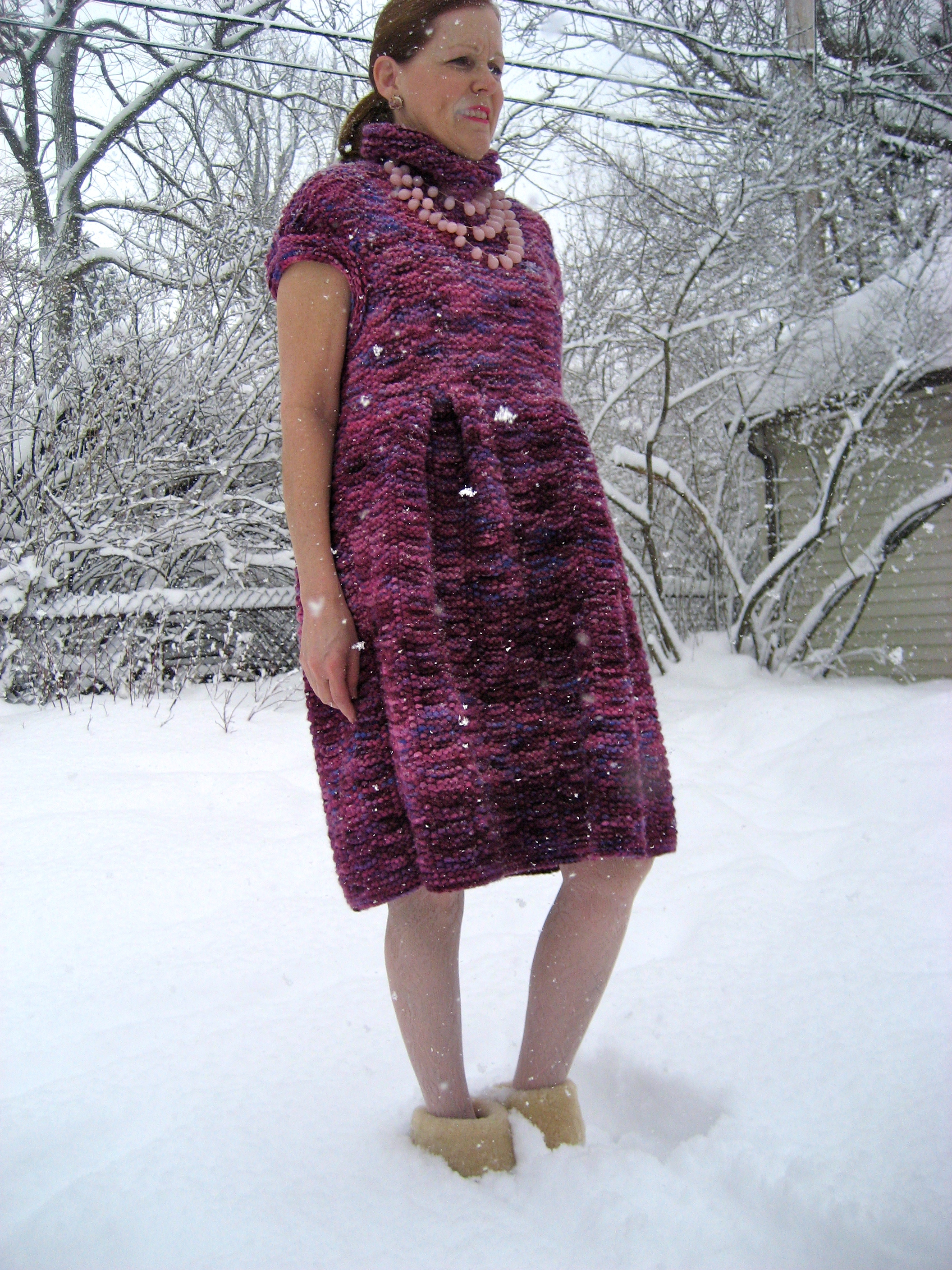 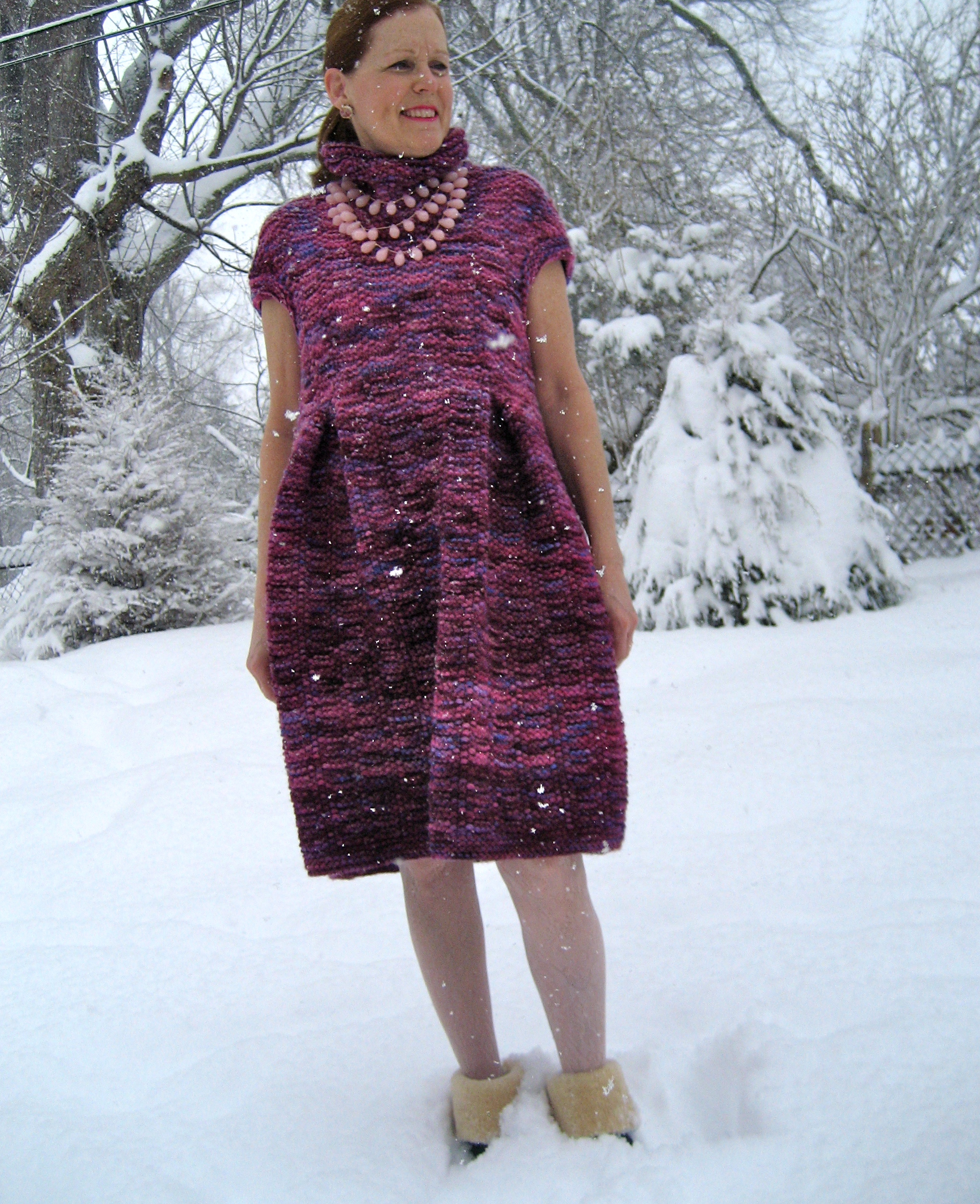 Oh, and I did lengthen it one inch.  Ha, they say for every decade older you are, you are to drop your hemline one inch.  I am thinking I might agree.

Winter wonderland backyard presented itself perfectly as our backdrop for this new addition to my wardrobe.