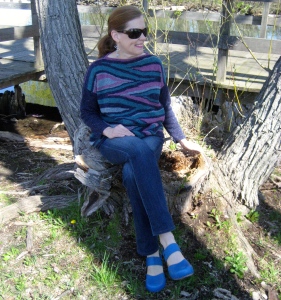 It began with the yarn this time, which for me, is very unusual;  beautiful Rowan Felted Tweed DK mostly in navy and a variety of other colors that were in my stash.  I have quite a collection of this yarn due to sales, left over from projects, and some from projects that have been reconsidered.  And recently, I’ve made a concerted effort to deal with some of these balls of yarn that have been hanging around now for some time.  So, I set out looking for a pattern that involved multiple colors and, of course, would work up to gauge.  Figuring it was Rowan yarn, I set upon looking for a Rowan pattern predicting I would have quite the choice.  And, I suppose stripes were on my mind as I have been noticing an abundance of striped projects recently flowing through on Ravelry.  Of course, fair isle lurked as a possibility, as well.  When I saw Julia Frank‘s short row pullover with a 70’s graphic theme, I knew that my search was over. 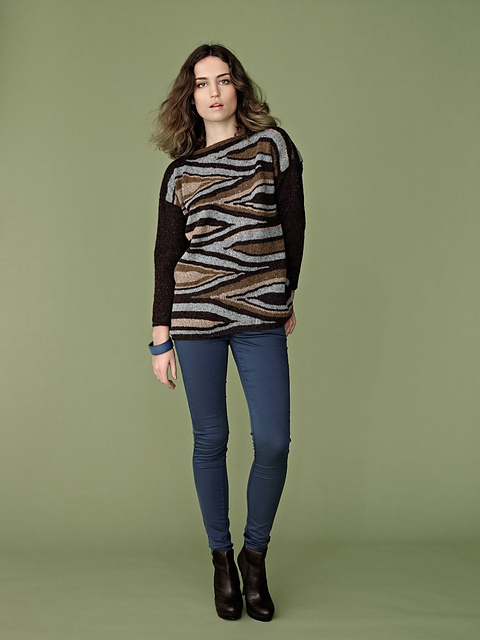 So, began the fun part, the choosing of the four colors.  I love red and thought that the red would  brighten up the color scheme beautifully and so I purposely set out to place that red in the most conspicuous stripes. 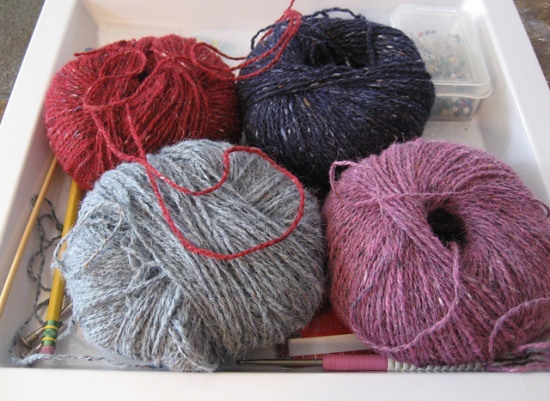 Well, I was so excited, changing the needle size and stitch count a gazillion times to get the right gauge and was off and running.  I completed the back, blocked it, and left it to dry.  Upon returning home after work ready to begin the front, I stopped short.  It looked exactly like: 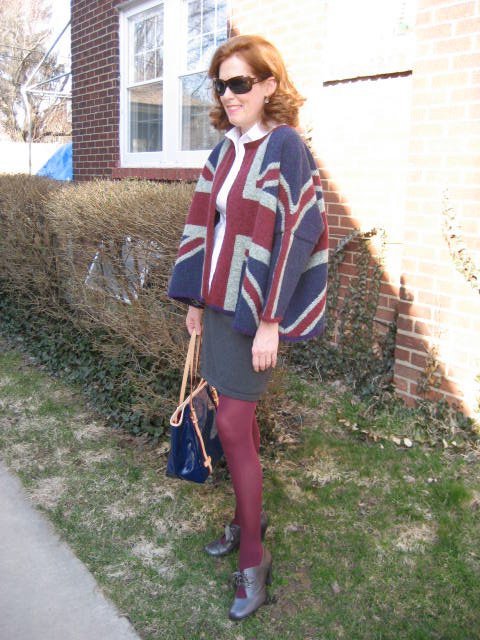 Three of the four colors were in my lovely British Flag sweater and somehow, the striping (at least the way I had worked it up) looked identical to the above.  As much as I love my “Jack and Me” jacket, I did not want another so I ripped the entire back out and set out again to configure my color scheme.  Hubby to the rescue with his amazing sense of color, and we came up with the below replacing the red only with a teal green:

So soft in hue, I thought the colors were really pretty together.  And, admittedly, the redo also gave me more practice at getting the short row skill down to a science.  Back redone, front knitted, sleeves solid, I felt I now had a beautiful work of art with its own identity.

The pattern itself is written clearly enough with some differences in terminology from American published knitting magazine(s) but those differences can easily be interpreted.  However, I never realized how much I have come to rely on the schematic of a design until I saw this:

Well, first off, how wide was the armhole and how wide were the shoulder seams?  How wide was the neckline and how wide were the cuff of the sleeves?   For such a gorgeous book, such magnificent photography, highly respected designers, and  lovely patterns, I was sorely disappointed.  Yes, I was able to complete the schematic by hand writing the measurements by utilizing the gauge and stitch count given within the directions.  It was just the fact that I had to.  Check out a schematic below from Vogue Knitting of a similar shaped garment and you will clearly see the difference.  Such a time savings having all the measurements at a glance!

What can I say, I’m just spoiled knitting mostly from those Vogue Knitting patterns.   With no other hardship, this project moved full throttle and here I am at one of my hubby’s fishing holes with a work of art I will have for many years to come. 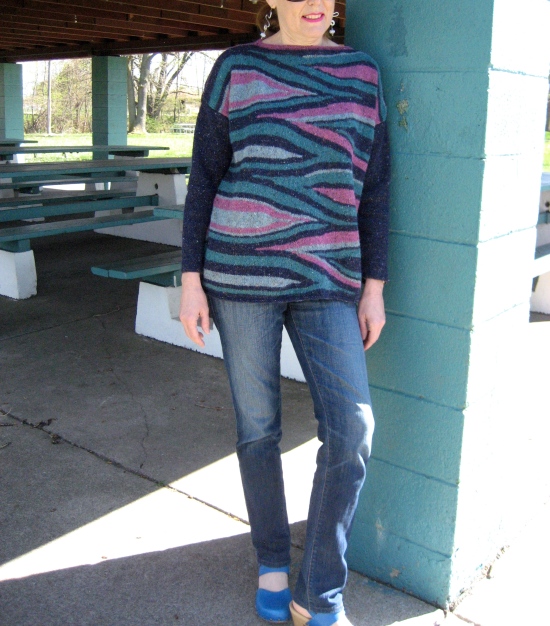 12 responses to “A Fashionable Fishing Hole”