It’s been awhile since I have knitted anything Fair Isle.  Not sure why.  It’s certainly a fun technique, keeps one’s attention, and continues to be popular among knitters.  It is a traditional technique and the garment is typically traditional in shape and structure as it is the beautiful patterns of color that catches one’s attention.

Fair Isle is a traditional knitting technique used to create patterns with multiple colours. It is named after Fair Isle, a tiny island in the north of Scotland, that forms part of the Shetland islands. Fair Isle knitting gained a considerable popularity when the Prince of Wales (later to become Edward VIII) wore Fair Isle tank tops in public in 1921. Traditional Fair Isle patterns have a limited palette of five or so colours, use only two colours per row, are worked in the round, and limit the length of a run of any particular color.  Some people use the term “Fair Isle” to refer to any colourwork knitting where stitches are knit alternately in various colours, with the unused colours stranded across the back of the work. Others use the term “stranded colourwork” for the generic technique, and reserve the term “Fair Isle” for the characteristic patterns of the Shetland Islands.

Perhaps I haven’t been attracted to this technique as I am so fascinated by different shapes, unique stitches, and dense textures.  Somehow, though I don’t want to lose this knitting skill and so I have been hunting for something to knit to re-introduce myself to the world of multi-color patterned work.  I wanted something that wasn’t too time consuming and of course, something stylish.  Well, I found the perfect thing, a Fair Isle swing jacket with short sleeves, designed by Nichole Reese, found in VK Fall 2009.

The  “swing” of the jacket is done by repeat increases throughout the body.  One could easily eliminate the swing effect by omitting those increases as you knit the body, which is knitted from hem to neckline.  Bulky weight Luxury Tweed Chunky by Debbie Bliss/KFI gives the project the perfect weight for a jacket and the perfect body that allows the fabric to keep the swing shape.  This is the yarn that was recommended and I am a fan of using the suggested yarn as then the weight and texture you see in the pattern which likely is what drew your attention to that pattern will be there when you knit yours.  (Every yarn works up differently and gives you a different drape, sheen, and flow.)  The collar yarn, however was knitted from scrap yarn pulled from my stash, sometimes held double, fingering weights held triple to get the heft and gauge recommended.  I knitted 2 different colors throughout the collar and when there was a third color added to the row, I used the method of duplicate stitch when the collar was finished.  I used a bit of Rowan Scottish Tweed 4 ply, a bit of Scottish Felted Tweed, and, as said, other bits of leftover worsted.  I find duplicate stitch effective, fun, and quick and do not hesitate in using it.  Also, it cuts down on the overall thickness of the fabric as when yarns are twisted and knitted together it builds heft and stiffness into the fabric.

This collar is lined with solid stockinette making it almost puffy (which is different than stiff).  Believe it or not, it is that design feature that drew me to the project as I think pulling a collar up in back is stylish and comfortable and seems very natural for me.  Once the lining is knitted, (which you simply keep knitting from the collar), you turn over and sew into place.  You may feel like you need a bit of seamstress skill here to sew it neatly over the seam where you picked up the stitches.  I kept a similar color palette to the pattern as being very wearable in my wardrobe, however added a touch of white in the collar to make the colors a bit more vivid.  All in all, I think this will be a very wearable piece for the upcoming season when all one will need will be a light jacket to manage the outdoors. 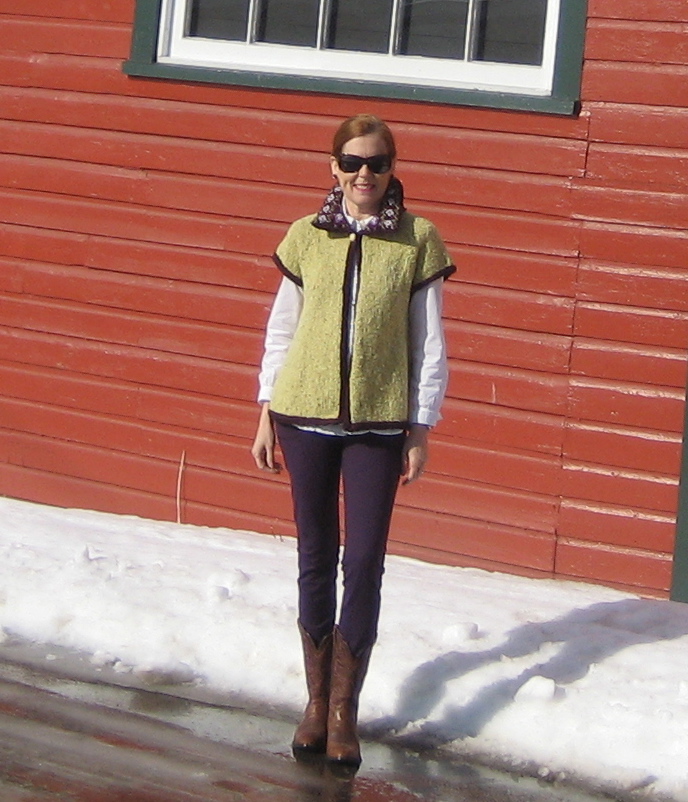